3. Countermarks on Coins of Caligula 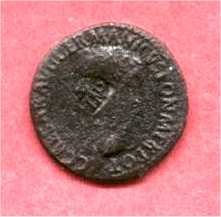 "TIAV" on reverse of Agrippa As, so called "Hofheim" type, Germania Superior. (countermark Martini Pangerl Collection 54)
Agrippa asses are thought to have been minted from Tiberius to Caligula. Please check therefore also the Tiberius section for Agrippa coins with countermarks.

TIAV is commonly read as "Tiberius Claudius Augustus". Strangely the "Claudius" would thus be missing from the countermark. TIAV exists also on coins of Claudius (see there). Another possibility would be to move the time of use to Titus (TIAV = Titus Augustus). In parallel NCAPR commonly seen as Neronian is possibly from Nerva's reign. 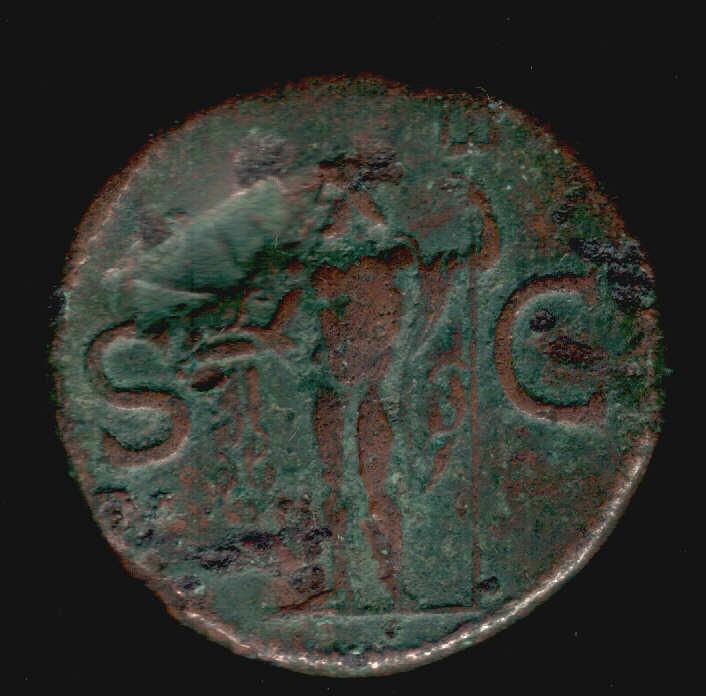 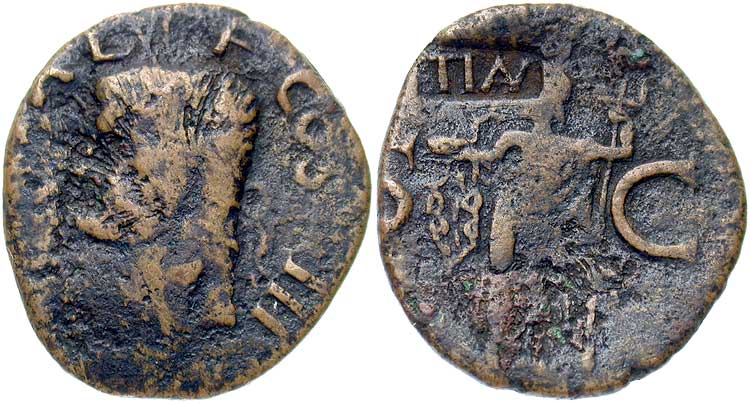 "TIAV" imitation on a sestertius of Agrippina senior 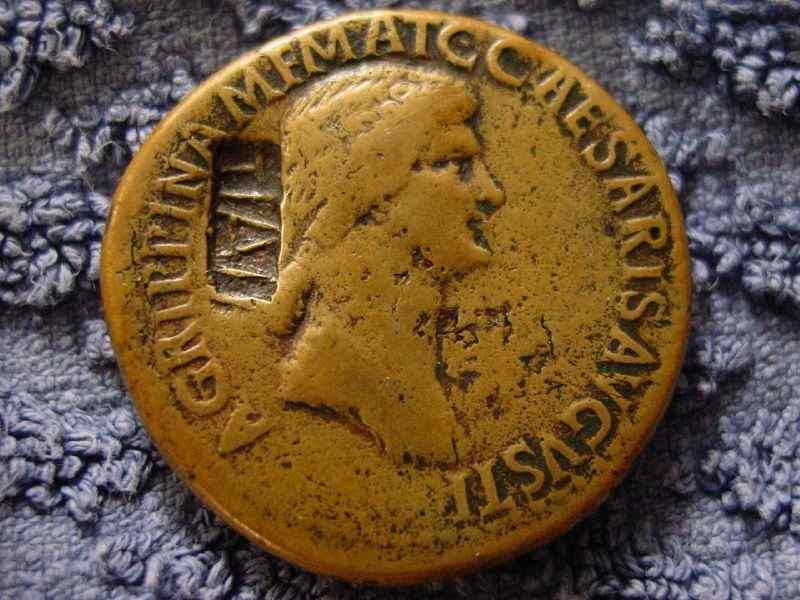 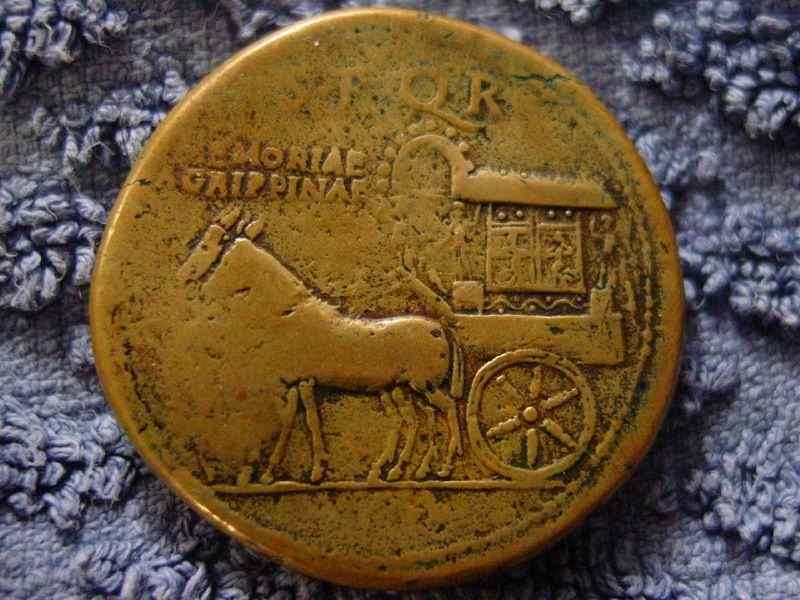 An interesting double strike: an Agrippa As overstruck by a Germanicus As, with "TIAV" countermark at a regular position on the reverse of the Agrippa As 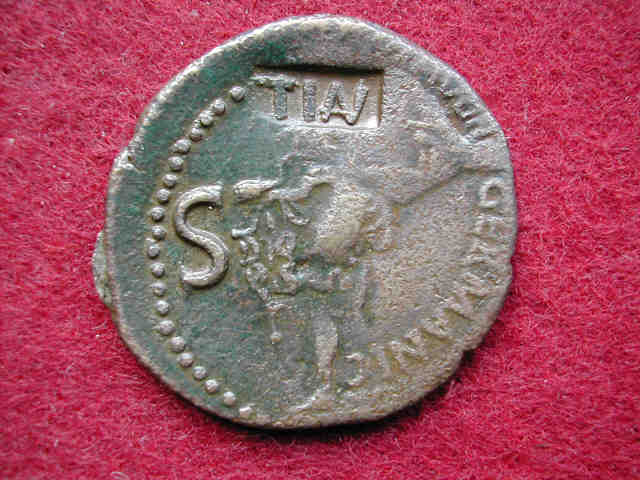 "TIB CLAIMP" in ligature on Germanicus As of Caligula, the countermark is from Claudius (countermark Martini Pangerl Collection 51)

Here a clear example of damnatio memoriae on a Caligula As,  TBCLAIMP countermark, and the "C" and the "G" of "C C"AESAR AV"G G"ERMANICUS scratched off. 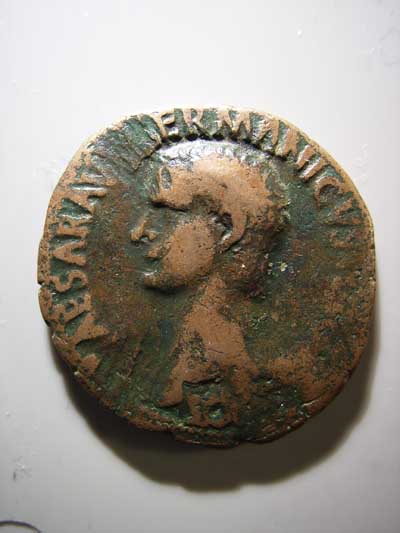 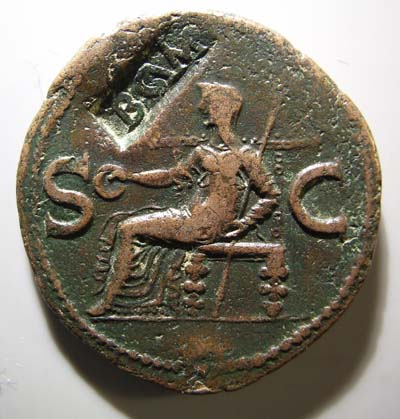 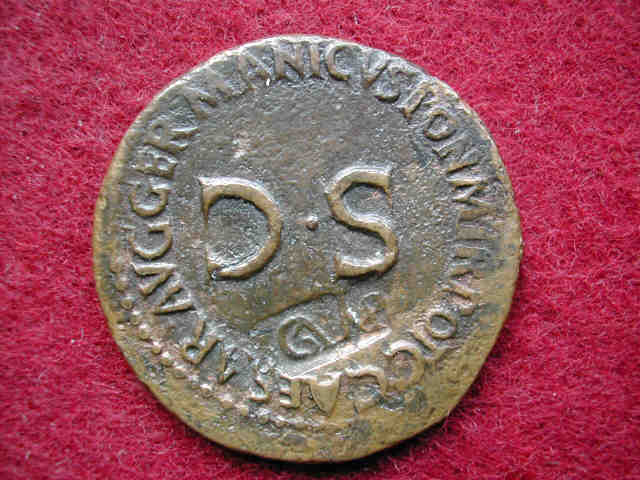 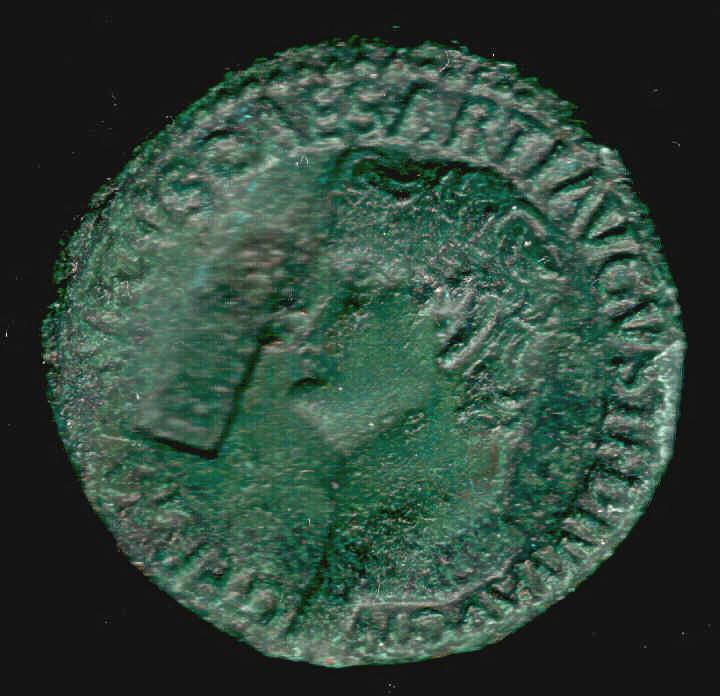 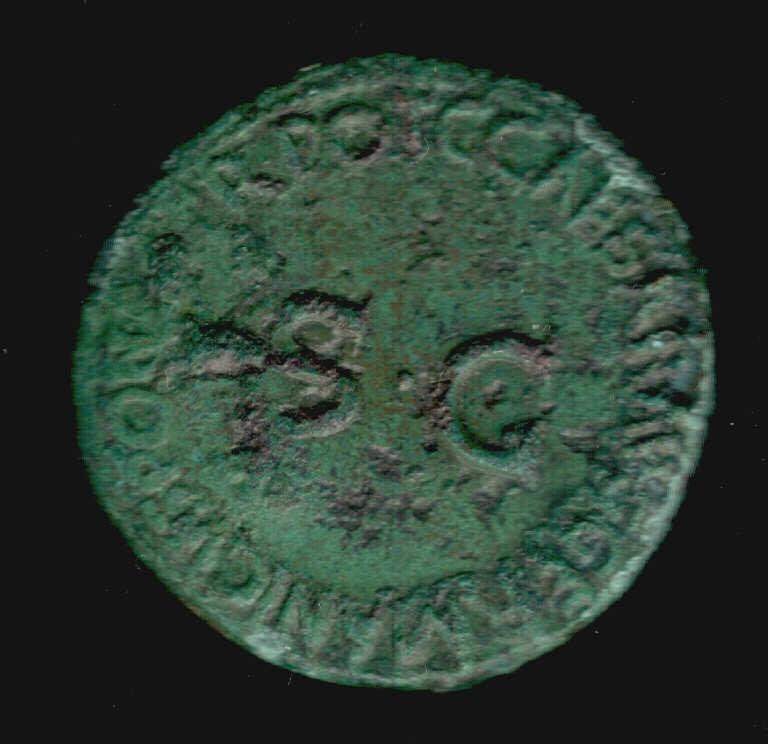 "TI.C.A" on As of Caligula, Germania Inferior ? The countermark is either from Claudius (Tiberius Claudius Augustus), or, less likely from Titus (Titus Caesar Augustus) (countermark Martini Pangerl Collection 58)

"TICA"  on Agrippa As (Agrippa Asses are thought to have been minted from Tiberius to Caligula). The TICA countermark is likely from Claudius (countermark Martini Pangerl Collection 58) 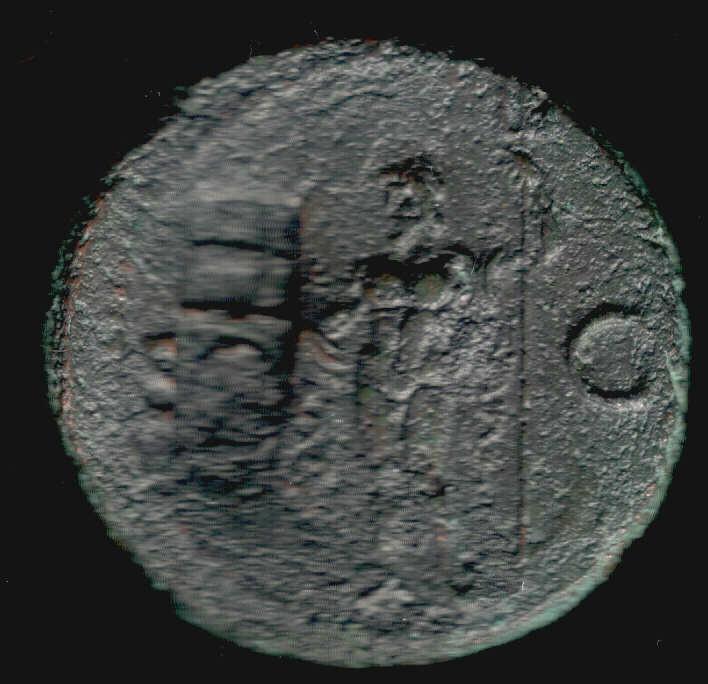 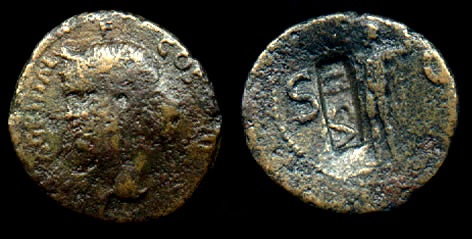 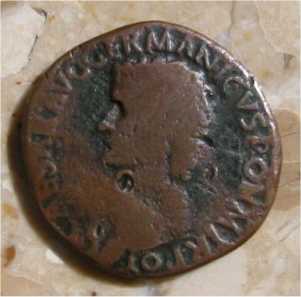 Another unknown countermark on a Caligula coin ("MV" in ligature ?) 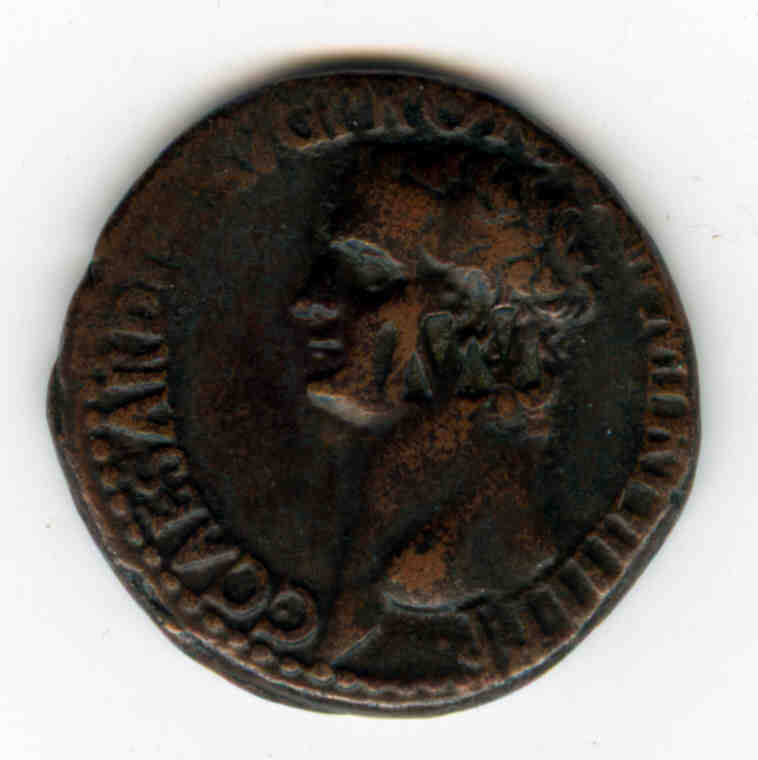 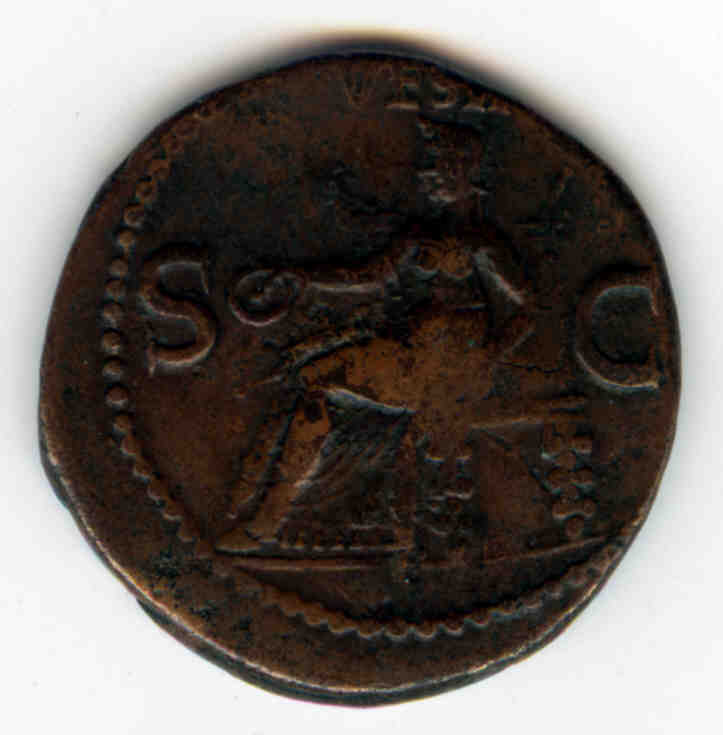 Unknown punched "MM" Countermark on a Caligula Sestertius, an "IMP" ? 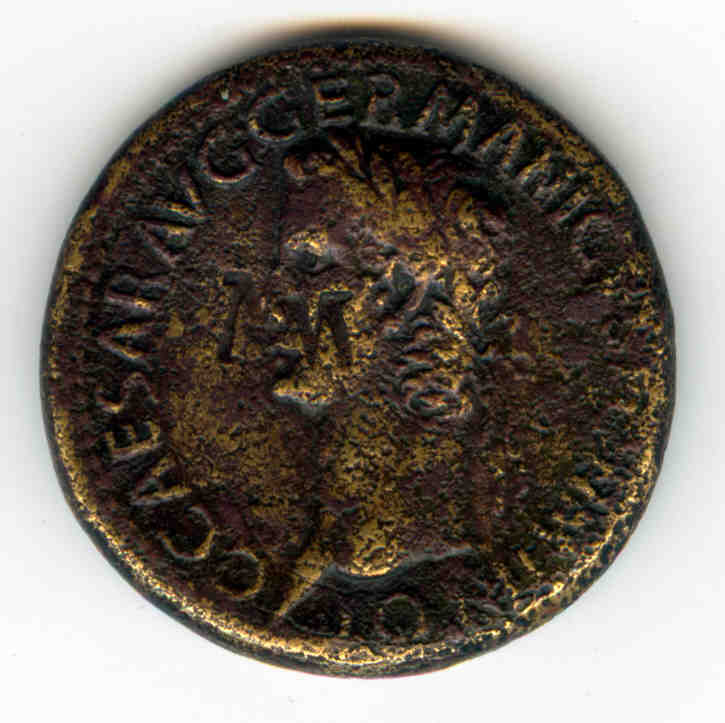 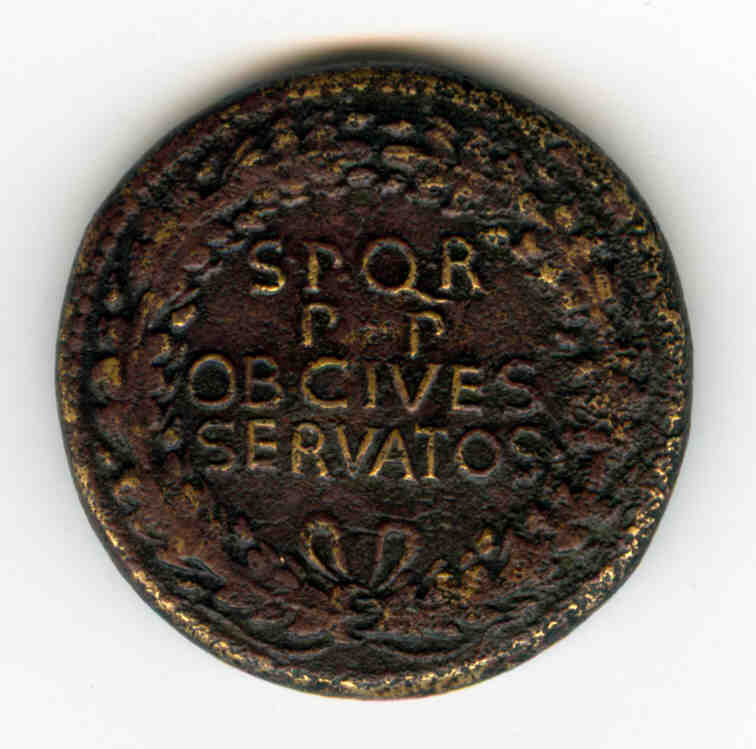 Special Section Caligula's Countermarks:
Some countermarks are thought to be from Caligula: 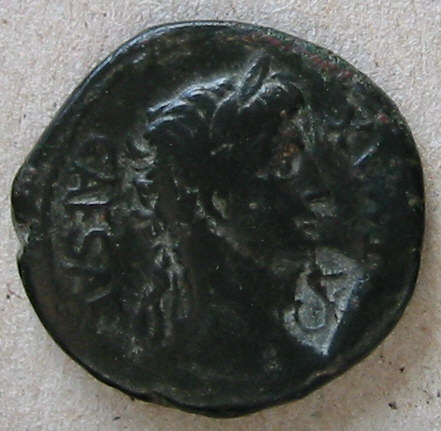 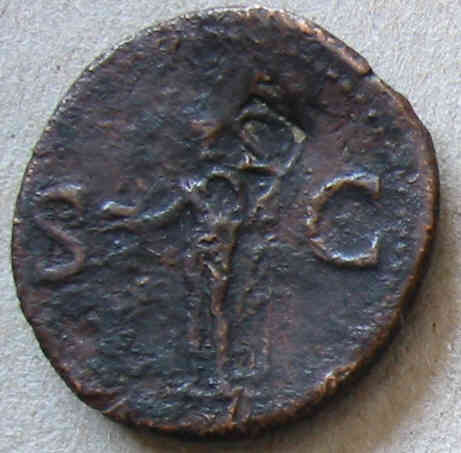 The debate whether the "IMPAVC" or the "CAESAR in ligature" countermarks belong to the Tiberian period or to Caligula is so far undecided. (both can be found in the Augustus Moneyer Countermark Section

Below an example of a Caligula countermark on a Tiberian provincial coin: 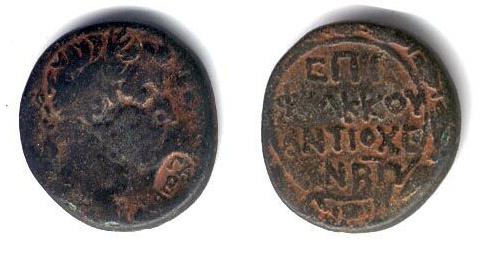 The base coin is RPC 4274. The Obverse is for Tiberius, the Reverse is for Lucius Pomponius Flaccus. Flaccus was Legatus of Syria at the same time Pontius Pilatus was procurator in Judaea. Flaccus, as Legatus, was the superior officer and nominally Pilatus' boss. Pilatus could call on Flaccus to provide military support, as earlier procurators in Judaea had done. The coin is dated to AD 33/34, but Flaccus was named to the post in AD 26 (according to Suetonius). The EPI (first three letters on reverse) is for Epitropos.  The countermark is for Caligula, year two, meaning AD 38.

Some more examples of this countermark (see also below for the dating system B= year 2, Gamma= 3, Delta =4, Epsilon =5 ) 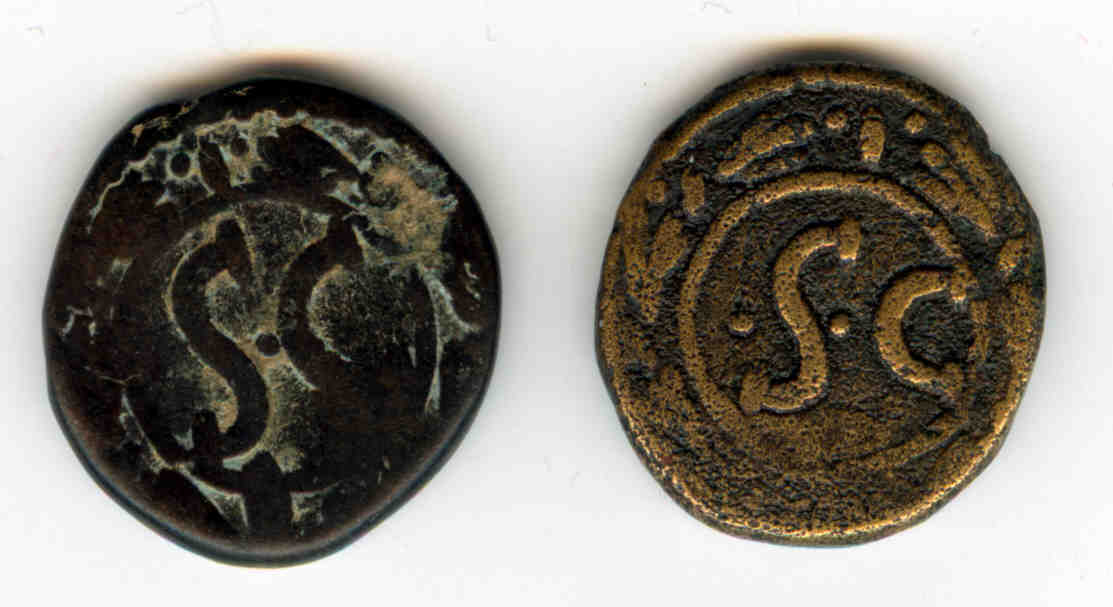